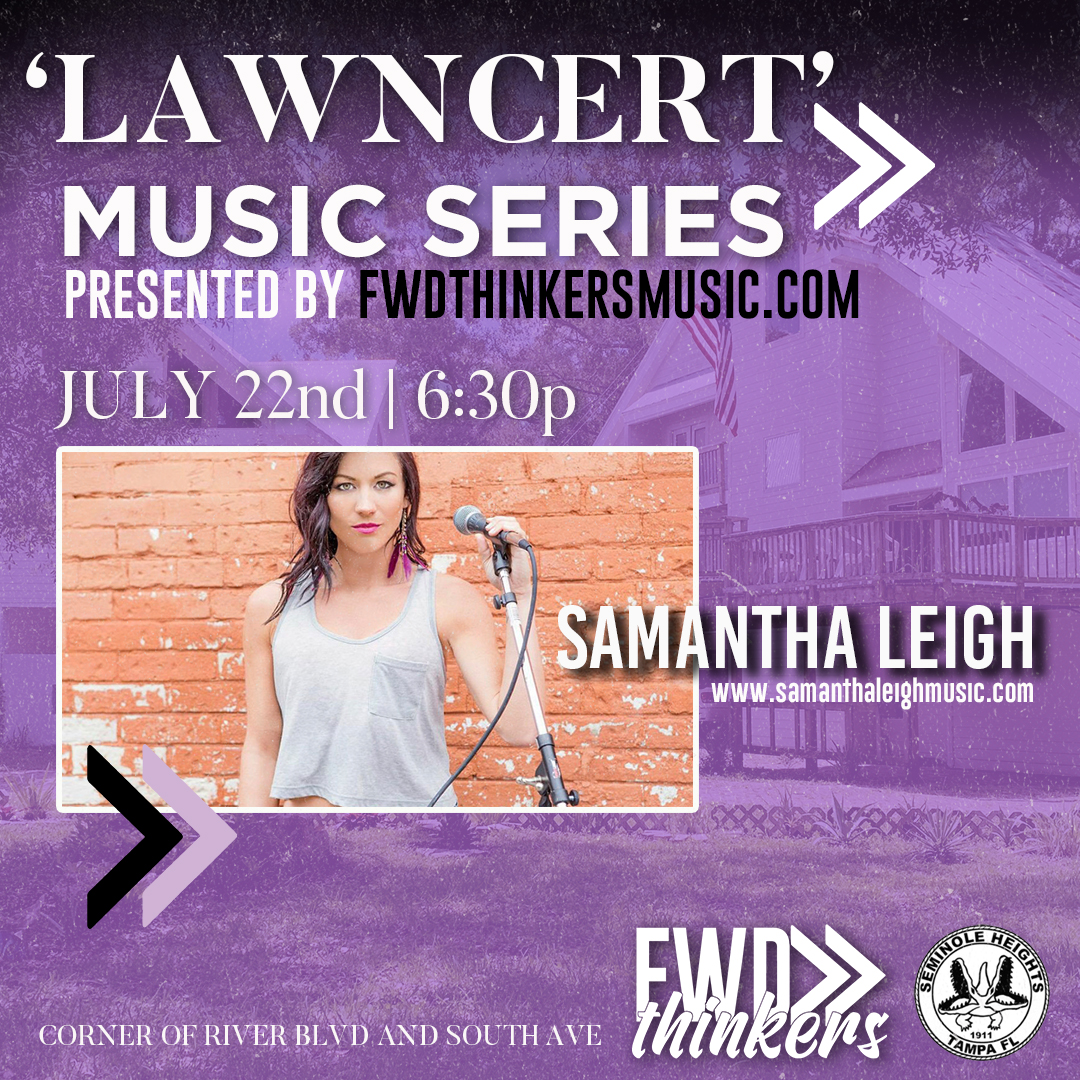 **Rescheduled from 7/15 due to weather

“Music is the universal connector. We understand that during these times especially, music has the ability to spread joy and bring smiles to people’s faces.”

The Neighborhood “Lawncert” Series: Presented by fwdthinkersmusic.com will host different singer/songwriters from around the city to help spread joy and bring smiles to people’s faces!
The FREE live shows will start at 6:30 pm sharp and last around 45-60 minutes. The performances will be held from an elevated bridge that allows concertgoers to walk up freely, maintain social distancing, and safely enjoy some live music next to the beautiful riverside park. Please contact taylorf@fwdthinkersmusic.com with any questions about the events.

“She’s a tiny little thing with a big ol’ voice who has a stage presence that can’t be denied.”

With her bluesy-rock vocals and sexy, funky style, Samantha Leigh is a musical force to be reckoned with. Originally from the home of rock and roll, Cleveland, Ohio, Samantha grew up with a heavy rock and country influence.

“I remember stealing my Mom’s “Reba” and “Judds” tapes when I was little and putting on mini concerts in my bedroom.” – Leigh

She made her debut stage appearance at the age of 3 singing “Crazy” by Patsy Cline with her mother’s country band “Buckshot”. From then on, singing continued to be her passion. She entered vocal competitions and talent shows and in 2004, won first place in her city’s Tri-School Idol.

Since her move to Tampa, Florida in 2005, Samantha has hit the ground running, expanding her singing career in the Sunshine State. She has been lucky enough to make performing her full time job, working with numerous corporate bands and in shows all over the country. In 2007, Samantha was hand picked to compete in “Hollywood’s Best New Talent” in Los Angeles, California where she placed top 10 in both country and contemporary categories.

“It was such an amazing experience to have the opportunity to perform on the stage at the Kodak Theater!!” -Leigh

She has gained a level of notoriety in the local community and earned the opportunity to sing the National Anthem for the Tampa Bay Rays in 2009, 2010, and 2011 and for USF Bulls basketball at the St. Pete Times Forum in Tampa, FL. In 2009, she was named FOX’s Tampa Bay Idol.

“In addition to great and soulful vocal chops, she had a sexy, spunky look with a great outgoing performance and attitude.” – St. Petersburg Times

At the 2010 Tampa Bay Idol competition, Samantha debuted her original song “Ain’t No Room”, a performance that gave her the jumpstart of exposure she needed to start promoting her own music. Shortly after she was asked to open for 10th Concession for the “Ellen Degeneres Anti-Bullying Fundraiser” at the RITZ in Ybor, FL. The exposure at the event gained her a spot on the local morning talk show “Studio 10” as a musical guest.

“She’s a tiny little thing with a big ‘ole voice who had a stage presence that couldn’t be denied. Right then and there, I booked her for a Studio 10 appearance. This girl is headed straight to the top, and we’d like to be a stepping stone for her.”

Within the last 10 years, Samantha has had the privilege of singing in bands sharing the stage with artists such as Andy Grammar, Josh Turner, REO Speedwagon, Kenny Loggins, Rick Springfield and Brandie Carlile, and sang back up for artists such as Mary J Blige and Josh Groban.

Samantha continues to pursue her goals of becoming a successful artist and is constantly looking for new ways to showcase her talents. She is currently recording her first album, an original, country-focused release featuring driving rock and pop undertones. With catchy melodies, strong lyrics and a powerhouse voice, you wont be able to resist singing along and joining the rest of us as fans of Samantha Leigh.