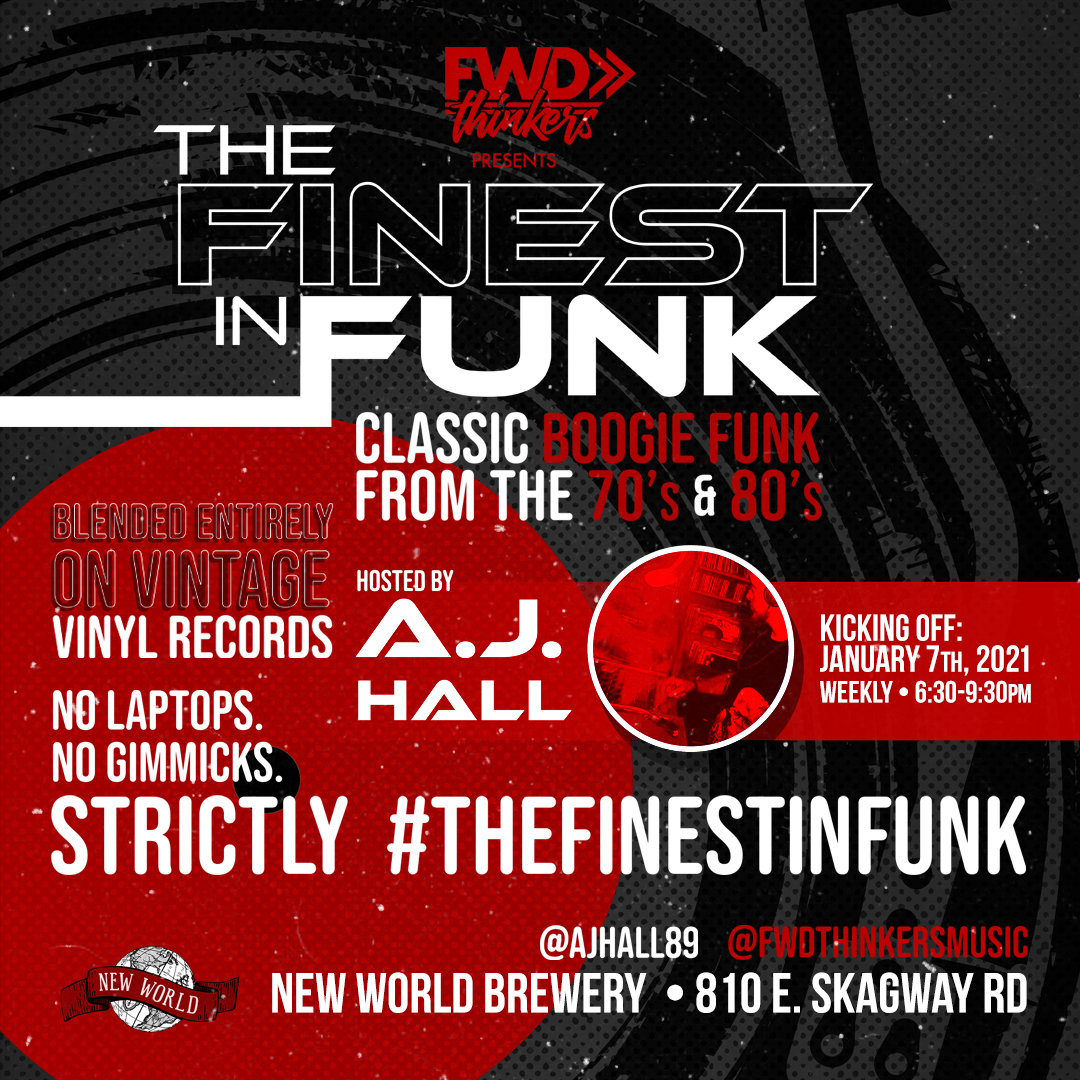 At FWDthinkers we love nothing more than to collaborate with the creatives in the city. Helping execute parties, album releases, and one-off events are our specialty. We are extremely excited to announce the newest partnership formed with the extremely talented AJ Hall. >>
This weekly, all Vinyl funk party will be held EVERY Thursday (starting January 7th) at New World Brewery from 6:30-9:30 PM
“My name is A.J. Hall and I’m a drummer/producer and Vinyl DJ. I was born and raised in Tampa, Florida and I recently returned to the city after spending 8 years in New Orleans. This weekly series is a bit of a homecoming for me and I can’t wait to share these records with the people.
There’s the word “funk” as most of the world knows it, and then there’s the word “funk” like myself and many other true heads know it.

Something magical happened in black music in the late ’70s and early ’80s.

Take the family that we all know as “disco” and give it a red-headed stepchild. A much more aggressive yet equally bubbly and danceable style emerged during the “death of disco”. That musical renaissance is fondly referred to today as “Boogie Funk”. In the late 70’s artists like Cameo, Teena Marie and the Gap-Band emerged out of the post-disco haze, mixing the melody and pop-song structure of disco with the hard-hitting bass-driven sounds of James Brown and it gave way to a new kind of groove. This is the music that quite literally changed my life when I first heard it and I’ve been a student as well as curator of boogie funk ever since.

“The Finest In Funk” is a concept I started back in 2007 when my “Boogie Funk” record collection had grown to the point where I could DJ 3 different parties in a week without repeating any songs.

When you’re at a “Finest In Funk” event you’re getting a crash course in some of the funkiest music ever made. All the hardest hitting vintage boogie funk from 1976-1985 blended COMPLETELY on my own personal collection of vinyl!”

Join us on Thursday, January 7th (and every following Thursday) at New World Brewery for this weekly party from 6:30-9:30 PM.

No Laptops.
No Gimmicks.
Strictly THE FINEST IN FUNK